Wearing signature orange overalls and a straw hat, “Farmer Mike” has become a cornerstone of the Half Moon Bay Art and Pumpkin Festival. For more than 35 years, festival attendees have flocked to his elevated stage to watch in awe as Farmer Mike, the Pumpkin Picasso, meticulously sculpts giant pumpkins into works of art. 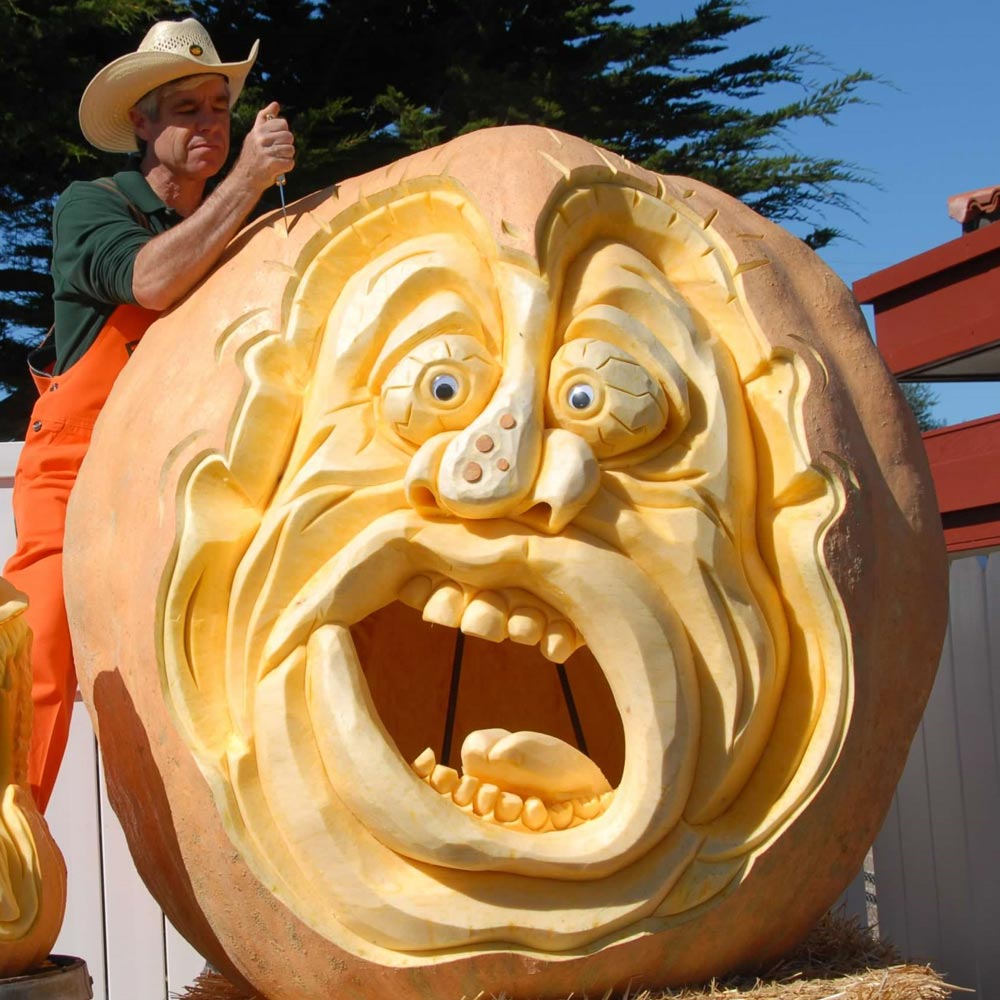 “When our kids were little we took annual Polaroid photos with them next to Farmer Mike pumpkins. Now we carry on the tradition with pumpkin selfies of our children’s children. The pumpkins are family!” –2019 Festival attendee

These are not your average jack-o-lanterns. The Atlantic Giant variety of pumpkins he carves range in size from a hundred pounds to more than a half ton each. Because giant pumpkins have a thicker shell, he takes advantage of the size and depth of the medium to create whimsical faces and reliefs that defy imagination.

Farmer Mike likes the positive, magical side of Halloween, so many of his pumpkin faces are happy. But he often lets the pumpkin shape dictate the face, “If the pumpkin looks awkward and grumpy, so will the resulting sculpture.” Fan favorites over the seasons have included everything from Spooky Trees to Puff the Magic Dragon, to the Wells Fargo stagecoach. Pop culture characters such as Charlie Brown, Yoda, and Minions have all made pumpkin appearances; no two carvings are ever identical. Over three decades Farmer Mike has sculpted hundreds of festival pumpkins, making him one of the most popular and enduring traditions at the event.

“When our kids were little we took annual Polaroid photos with them next to Farmer Mike pumpkins. Now we carry on the tradition with pumpkin selfies of our children’s children. The pumpkins are family!” - 2019 Festival attendee, Redwood Shores, CA.

In October of 1986, “Farmer Mike” Valladao first stepped onto a stage at the Half Moon Bay Art & Pumpkin Festival with knife in hand.

At that time, giant pumpkins were rare. But Mike had grown this one and knew the shell was almost 5 inches thick. His plan was to deliver something completely different than the ‘triangle eye’ carvings most people expected. His first Half Moon Bay-stage creation was a three-dimensional laughing face that amazed the crowds.

“I had never carved in public, so that first festival was a bit of a stretch,” said Mike. “We weren’t sure people would want to take the time to watch a giant pumpkin being carved.”

Apparently they did. The nightly news picked it up. That led to national attention and even an appearance on The Tonight Show.

Farmer Mike typically completes two pumpkins per day during festival hours and can be found at the Coastside County Water District lot at 766 Main Street, about the mid-point of the festival grounds. Trained as an Engineer, Mike happily answers technical questions from festivalgoers interested in his craft.

Mike has deep roots to Half Moon Bay. In the 1800s his family opened the coastside’s first Feed and Seed store. Years later his grandmother taught grade school in a one-room schoolhouse just south of town.

Outside of Half Moon Bay, Mike has demonstrated his carving talents at the State Fair of Texas, the California Academy of Sciences, Interop New York, and the San Diego Zoo. He has been featured in Boys Life Magazine as well as the Old Farmer’s Almanac.