Festival Fare Celebrates the Autumn Harvest With Pumpkin Anything and Everything

There’s no better place to celebrate (and eat) the autumn harvest than at Half Moon Bay’s Art & Pumpkin Festival. This year marks the 51st anniversary of this world-famous event and its rich agricultural heritage, nestled between the sea and the fertile fields with swaths of brilliant orange pumpkins on the San Mateo County Coastside. 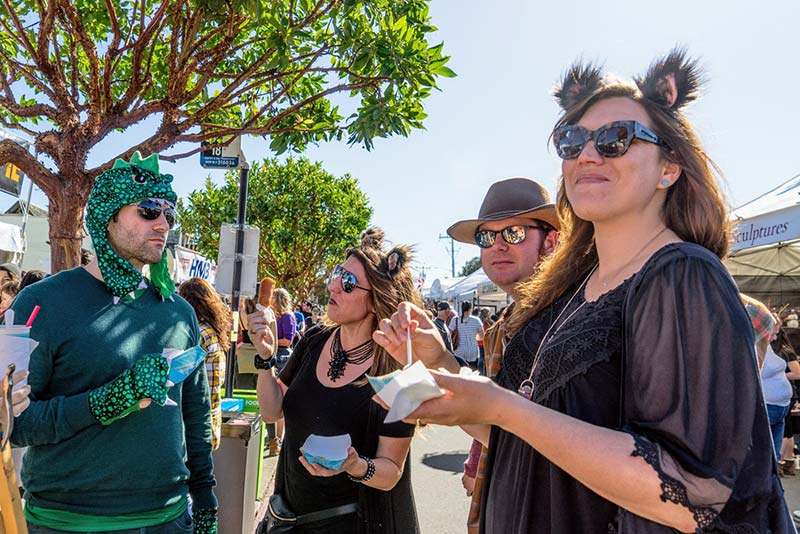 Pumpkin ravioli, pumpkin pie with whipped cream, and pumpkin ale are just a few of the harvest-inspired treats you'll find at this year's 51st annual festival.

At this year’s festival, October 14-15, more than 20 nonprofit groups will feed the hungry hordes, serving up delectable homestyle dishes, many with tributes to the local harvests of artichokes, pumpkins and Brussels sprouts that showcase the region’s bounty while raising critical funds for their worthwhile causes.

True to its title as World Pumpkin Capital, Half Moon Bay gives the beloved gourd a starring role in its festival fare. Not to be outshone by the preponderance of pumpkin treats, several prominent coastside crops will also be featured, but there’s more than just coastal food. Dig in!

The festival is open from 9 a.m. to 5 p.m. along historic Main Street. Admission is free. See the Event Map or the free Festival Mobile App for food and drink locations.

Dedicated early birds can beat the traffic and start the day off right with a hearty stack of Half Moon Bay’s famous pumpkin pancakes (or buttermilk pancakes) served with a smile by the exceptional student/athletes on the HMB High School Varsity Boys Basketball Team. Top it off with sausage, fresh orange juice, tea or coffee, and you have the makings of a winning breakfast. They start serving at 7 a.m. on Saturday and Sunday in the City Hall lot at Main and Kelly. Get tickets in advance to avoid the line.

Enjoy mouthwatering Portuguese linguisa, jumbo hot dogs and Italian sausages grilled by the Beautification Committee. They will also be dishing up slices of the tastiest pumpkin pie on the planet layered with a healthy dose of whipped cream.

Enjoy your pie a la mode with a scoop of wickedly rich pumpkin ice cream from the Episcopal Church booth.

The local 4-H Club is renown for their melt-in-your-mouth pumpkin rolls. The tangy crème cheese-filled confections are such a big hit, the young people also sell the recipe.

American Association of University Women (AAUW) will be serving its delicious, all-natural pumpkin bread, by the slice or loaf, using the revered “Grandma” recipe, and their heavenly, sweet pumpkin muffins and coffee.

Fill up on some sinfully rich pumpkin cheesecake whipped up by the San Mateo County Sheriff Explorers.

The Knights of Columbus take pride in crusading for the much maligned Brussels sprout and more beloved artichoke, two of the most prolific Coastside crops. Cooked in a zesty marinara sauce, the sprouts have a flavorful taste that make converts out of everyone who tries them. After removing the leaves and prickly hairs, the artichokes are steamed leaving just the delicate hearts which are then sauteed in an aromatic blend of garlic, olive oil and herbs. Plus there are the gourmet-good green beans!

Garlic Fries from the Boy Scouts

For something hearty, grab one of the grilled gourmet sausages or hot dogs from Big Wave.

Savor a killer corn dog from the Half Moon Bay Girls Softball Club.

Hungry for some Mex? Try the Cougar Boosters super delicious chicken, beef and pork tamales with a bold mole sauce.

Cool off with a root beer float from by the Half Moon Bay Volunteer Fire Department.

Hunch into the popular hot beef sandwiches on a soft roll by the IDES Society.

Grilled Burgers & Corn on the Cob from The Lions Club

The Lions Club will be firing up the grill all weekend for their tasty hamburgers, cheeseburgers, veggie burgers and fresh, sweet buttery corn-on-the-cob.

The gourmands from the Coastside Adult Day Health Center (CADHC) dress their Italian and Polish sausage sandwiches up with a zesty marinara sauce, taking “savory” sausages to a whole new level.